Prepared aims to transform the way schools communicate during an emergency.

M13 is thrilled to announce that we have led a $1.8 million seed round in Prepared, a company that is building critical technology to keep school campuses, and our world at large, safer.

On April 20, 1999, an episode of extreme violence in a suburban Denver community shocked the United States, causing 15 fatalities and 21 injuries in less than 60 minutes. And since that fateful day, our nation has experienced over 230 school shootings, resulting in 304 deaths and 485 injuries. After experiencing the impact of a school shooting firsthand, Prepared’s co-founder Michael Chime realized that the technology behind emergency response systems was antiquated and incapable of providing the immediate support needed for these dire situations. This is why a mere seven years later, while studying as an undergraduate at Yale University, Mike teamed up with fellow students Dylan Gleicher and Neal Soni to found Prepared, a one-touch mobile alert system that facility administrators and faculty can use to instantaneously alert both the entire campus and 911 dispatchers.

I first met Mike while he was auditing an MBA class as an undergraduate at Yale University. Full of promise and vigor, Mike walked me to my Uber at the end of class and energetically talked me through his passion to keep campuses safer. Eight months later, Mike and I reconnected and he presented a fully operational business along with numerous active customers and first responder engagements. This young undergraduate from Yale had taken a heartfelt passion and dream and brought it to life through pure determination.

Prepared’s technology helps alleviate confusion, promote information flow, and expedite response time during an emergency. Initially focused on schools (but expanding to enterprise buildings and public spaces broadly), Prepared offers a one-touch mobile alert system that facility administrators and faculty can use to instantaneously alert both the entire campus and 911 dispatchers. Whereas traditional 911 calls rely solely on the caller’s word, dispatchers using Prepared in their dispatch workflow can analyze the progression of an emergency through the aggregation of multiple content inputs, GPS heat map data, and provide real-time, two-way communication to the entire facility.

Mike, Dylan, and Neal are young entrepreneurs who define what it takes to build a meaningful business with an outsized impact on society. I had the opportunity to sit down with Mike to discuss his vision for the business, what’s on the horizon, and how Prepared seeks to make our world a better place. Congratulations, again, to the entire Prepared team on this amazing milestone; M13 is thrilled to be a part of your journey! 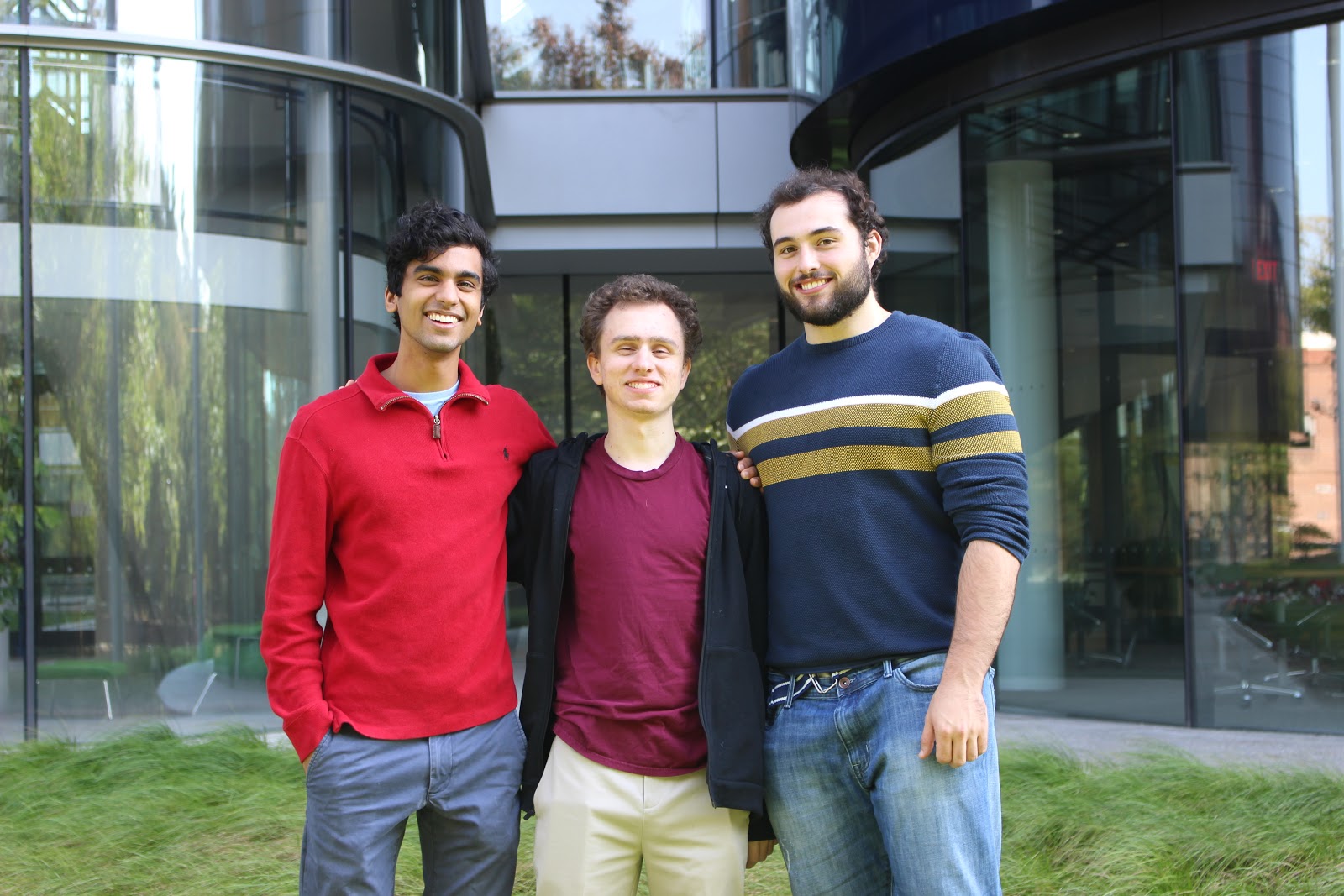 Prepared’s founders: Neal, Dylan, and Mike (from left to right)

Tell us a little bit about your background and what drove you to start Prepared.

I first saw the devastating impacts of school shootings in 2012, when an active shooter targeted Chardon High School in the town adjacent to mine. I was close to that community and experienced the devastation firsthand, especially long after the news outlets and media had left. I started taking a closer look at how these tragedies become so deadly, and my instinct that not enough was being done about this issue was reinforced when Parkland happened. The shooting at Parkland lasted a little over 5 minutes. And yet, it took 3 minutes, 30 seconds before the first code red was disseminated, instructing students and teachers to take shelter. Casualties had mounted during those critical minutes, and by the time the school locked down, the damage had already been done. Something about this didn’t sit right with me.

How could schools, the one place where students are supposed to feel safe and learn and grow, be so poorly prepared for instances in which lives were at stake? Why were they still relying on antiquated systems like intercoms, walkie-talkies, and flip charts when technology has pushed so far ahead in so many other industries?

Active shooter events were just the catalyst that pushed me to build Prepared. The issue helped me understand how antiquated school safety systems are a much larger, broader emergency problem. With the right technology, schools can not only become better prepared for active shooter scenarios, but any event fire, earthquake, medical in which seconds can save lives. I knew something had to change, and I became determined to find a solution that would equip schools with the technology they deserved and needed to be prepared for any emergency. 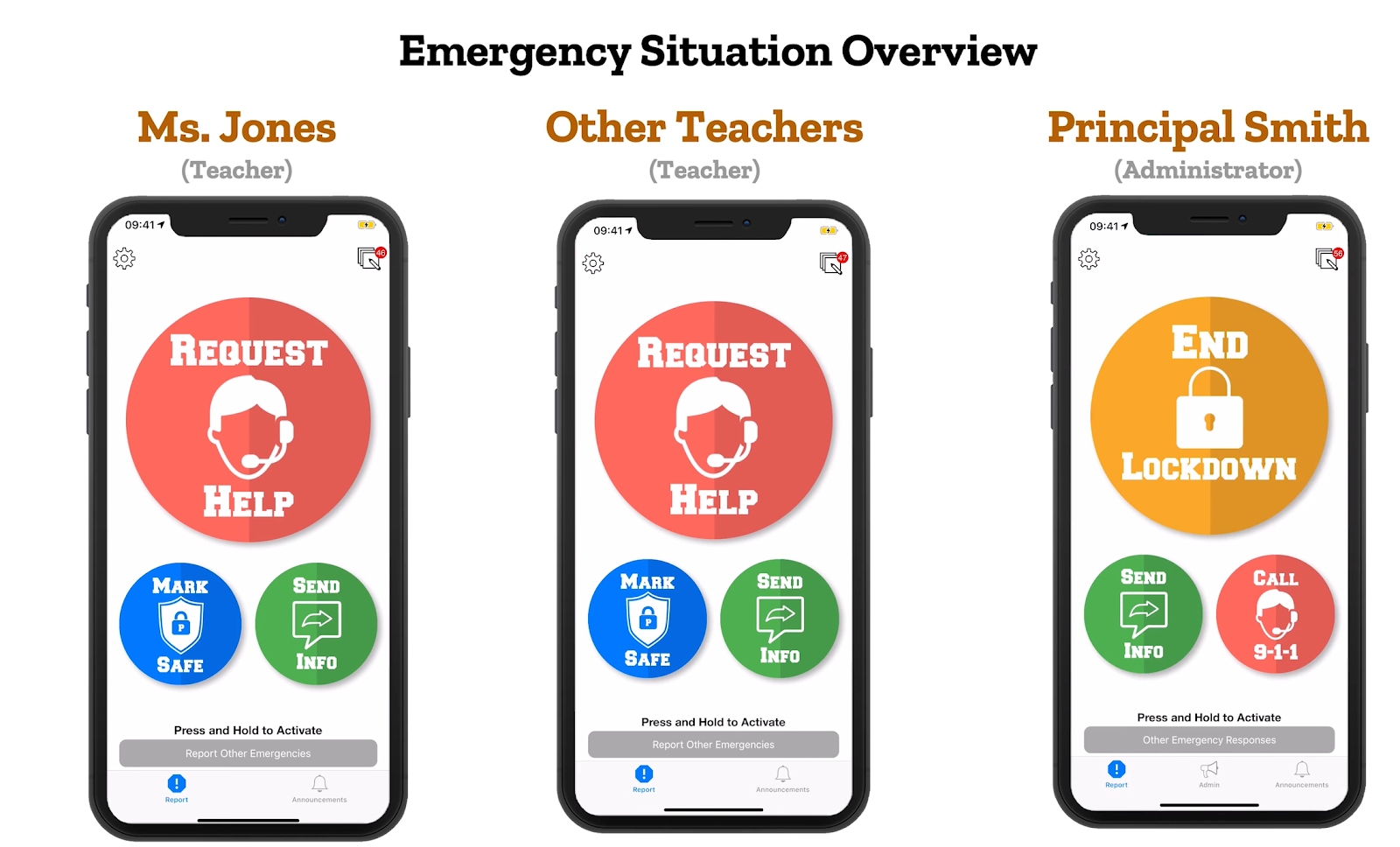 A preview of Prepared’s user interface

What are Prepared’s overarching mission and vision?

Over the past 15-plus years, we’ve all witnessed an incredible discrepancy between how hard school officials work to create safe learning spaces for their students and how little resources they are often provided. With tight budgets and countless priorities, many schools don’t have the option of upgrading their safety and security infrastructure. As a result, even today, with technological innovation occurring seemingly everywhere else, K-12 schools largely rely on antiquated systems like intercoms, walkie-talkies, and flip charts. When it comes to situations where every second counts, these tools simply don’t cut it, especially when it comes to staying connected and informed—two critical facets of emergency preparedness.

Prepared was founded around one key insight: our smartphones and computers are some of the most powerful, widely accessible modes of communication ever built … The tools that schools need to make dramatic changes to their emergency response already lie in the hands of their faculty and students—they just need to be activated and used in a different way.

Our mission is to unlock the power of everyday technology like smartphones and computers to transform the way schools communicate during any emergency. By creating safety using tools that are highly-integrated in our day-to-day lives, we can underline our belief in how accessible safety should be and achieve our vision of a safer, more transparent world for everyone. 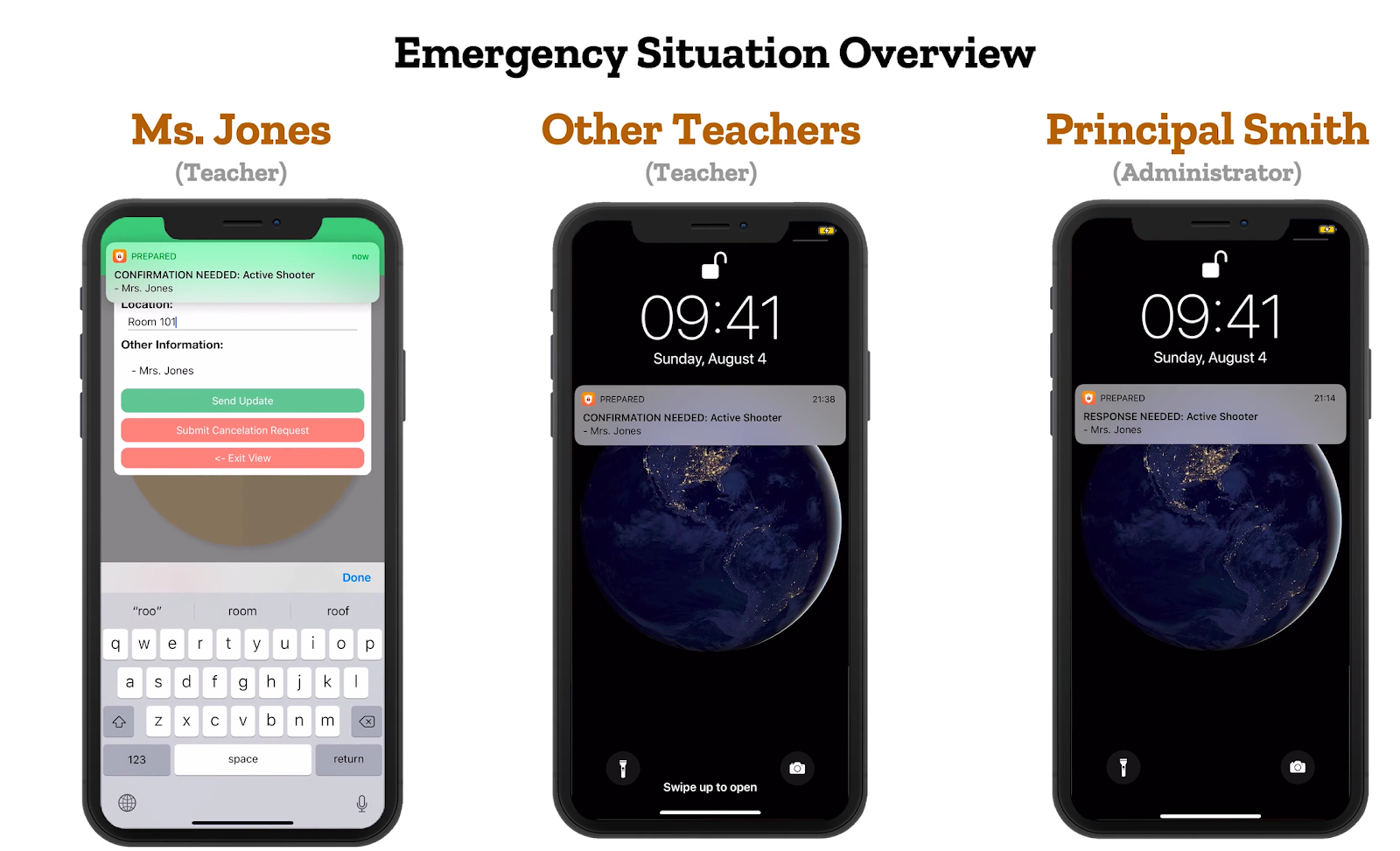 A preview of Prepared’s user interface

We beta tested our idea with a group of 22 schools a couple of years ago before we even had a product. We’d been demonstrating a prototype of our solution to various schools, and some of them were so excited about the prospect of a system like ours that they were willing to pay for early access to a yet-to-be-built product.

These early partners of ours were critical to the success we have today. Because we built our product directly alongside the very people who would be using it in the future, it has translated as an intuitive solution for the countless schools we’ve worked with since then. Today, we’re excited to validate product-market fit as we launch in 150-plus schools across the U.S., and we will be capitalizing on their input to iterate and improve.

In addition, COVID-19 is actually helping us grow, in some ways. Schools are riding this wave of online curriculum, becoming more and more comfortable with digital tools. For a system like ours, which introduces this same transition in safety, adoption has been a no-brainer. As schools inject technology into their day-to-day operations, they’ve begun to see a place for Prepared in their safety infrastructure, too.

Our team has always been ambitious, but with support from M13 and our recently closed seed round, we’re looking to clamp down on the market validation we’ve seen so far and pursue a trajectory of venture-accelerated growth.

Our biggest goal for the next year is geographic coverage. We’re determined to sign schools in five major metropolitan areas in the U.S. by EOY ‘21. Network effects among schools are huge, and creating clusters of coverage will also help us build relationships with local 911 operators and expand our core product offering into dispatch systems as well.

On the internal front, we’re looking to grow. While our scrappy team of five has carried us far, we’re looking to fill our team with customer success, engineering, product, and sales talent. It’s good news! We have a lot of demand from schools and want to keep up the momentum by ensuring that we have the people to provide an exceptional onboarding experience and build a lasting relationship with each and every one of the schools we serve.

If you’re interested in learning more about M13’s portfolio and if you’d like to receive future updates on our investments, please subscribe to our newsletter here.