Investing in the Future of Commerce

M13’s history of investing in DTC brands is propelling us toward the future of commerce.

This is the first of a multi-part series on M13’s Future of Commerce thesis.

Changing consumer behavior has been at the center of M13’s investment thesis since the inception of the firm. We gravitate toward large markets that are undergoing massive consumer shifts, and we invest behind the entrepreneurs and visionaries who are building technology enabling these shifts. Perhaps the best example of this thesis in action is in e-commerce, where we ask ourselves how consumers will purchase goods and services over the next decade.

We’re all aware that e-commerce gained momentum over the last two years, propelled by a global pandemic that forced goods and services to be purchased online. Even as the physical world has begun to open back up, however, e-commerce is showing no signs of slowing down.

To put the size and growth of the U.S. market opportunity into perspective, e-commerce reached nearly $800 billion in total spend and represented 14% of total retail sales in 2020. Looking over the next five years, the TAM is expected to double to $1.65 trillion and reach 24% online penetration—meaning over the next five years alone, $850 billion of new TAM will be created, which is more than the total e-commerce market size that has been created to date. 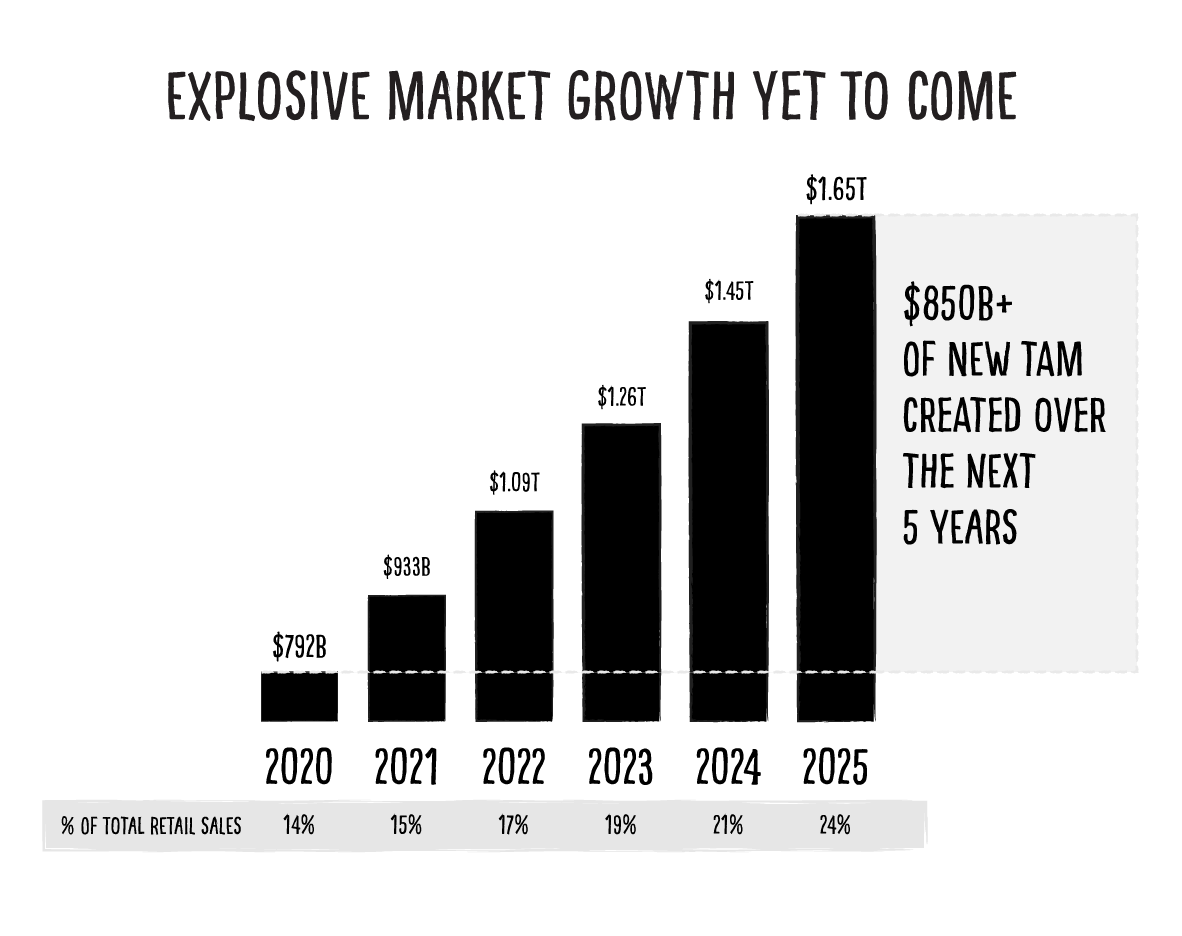 With so much market opportunity in the near term, we’re constantly asking ourselves three key questions about the future of commerce: How is consumer buying behavior shifting? Where can value be created from this shift? And who will capture the resulting value?

Before looking forward, we want to first look back at our own portfolio evolution as we’ve adjusted to the evolution of commerce.

Commerce investing has always been in the M13 DNA. The first M13 investments in the early and mid-2010s included category-defining brands such as Bonobos, Ring, FabFitFun, and Daily Harvest. These investments were made through Fund I, an evergreen fund with capital deployed between 2012 and 2018. The investment thesis was based on a changing consumer behavior toward convenience and brand community. DTC brands emerged, taking on retail incumbents as they built products in consumer white spaces. We saw the benefits of an online delivery model and the creative storytelling of online-native retailers, and we backed early leaders in food, apparel, consumer electronics, and more.

Take, for example, Bonobos, which was one of our first Fund I investments. Industry pioneers Andy Dunn and Brian Spaly were doing something that was unique at the time—selling pants that fit, completely online. Few companies like this existed, and they helped create a white-space category for digitally native fashion. It’s crazy to think about now, but back then, one of our risks in investing in the company was: “Will people feel comfortable buying pants online?” Thankfully, we were able to buy into Andy and Brian’s vision of what is now an obvious consumer behavior. 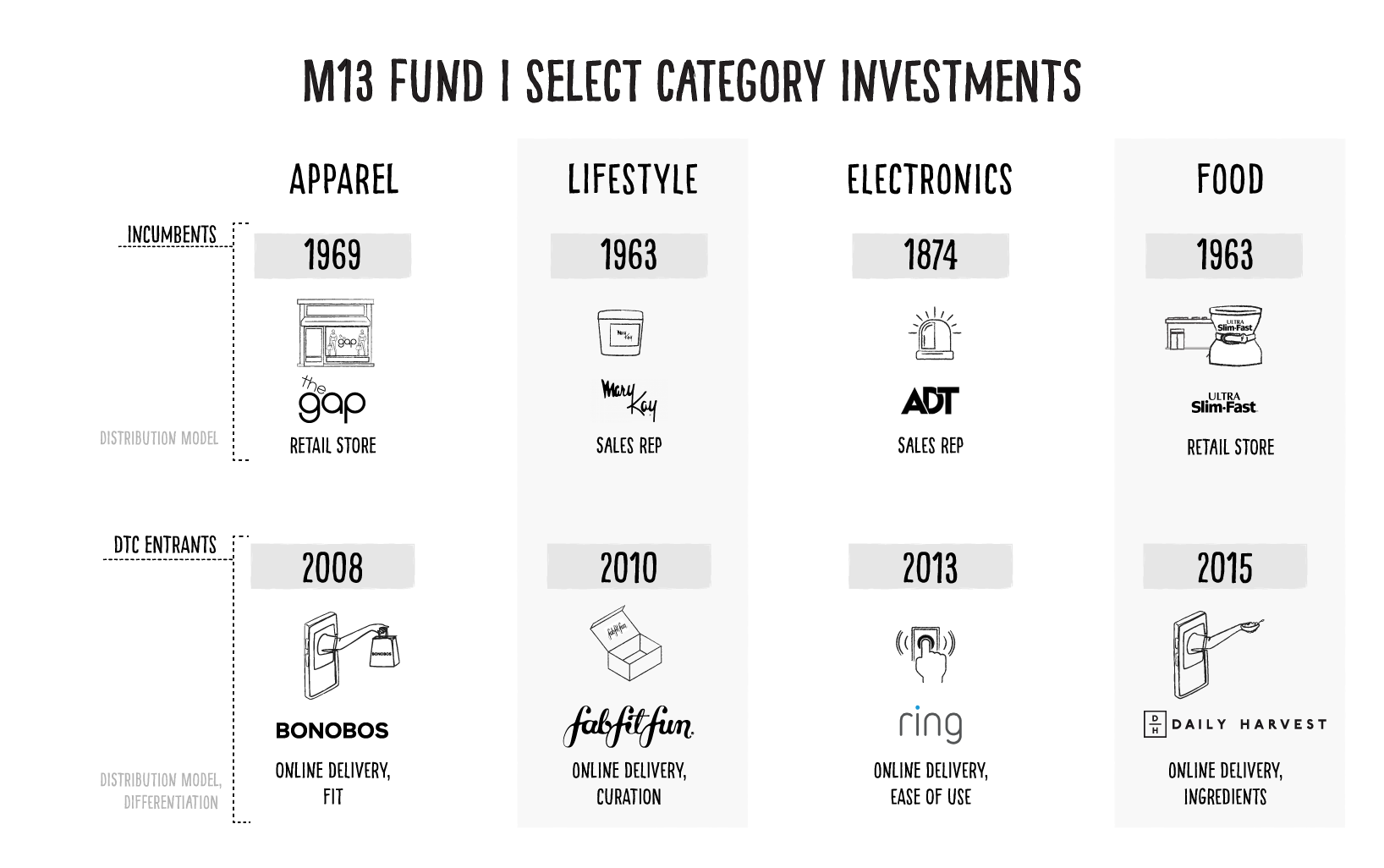 As we transitioned to Fund II in 2019, we began to see that the distribution model of selling online was no longer going to be a competitive moat in commerce. We attributed this to two primary drivers:

Competition: Infrastructure and software tools made it easy to set up a store and start selling online

Shopify, BigCommerce, Wix, and other online storefronts allowed small business owners to set up a site in just days. As the barrier to entry was lowered, gaining access to e-commerce distribution became easier and more entrants arrived. Take Daily Harvest, for example—in 2015, they created a new white space for healthy frozen foods shipped to a customer’s door. By the time Fund II launched, there were at least a dozen competitors knocking off the idea and selling their own versions (none of which taste quite as good, in case you’re wondering). 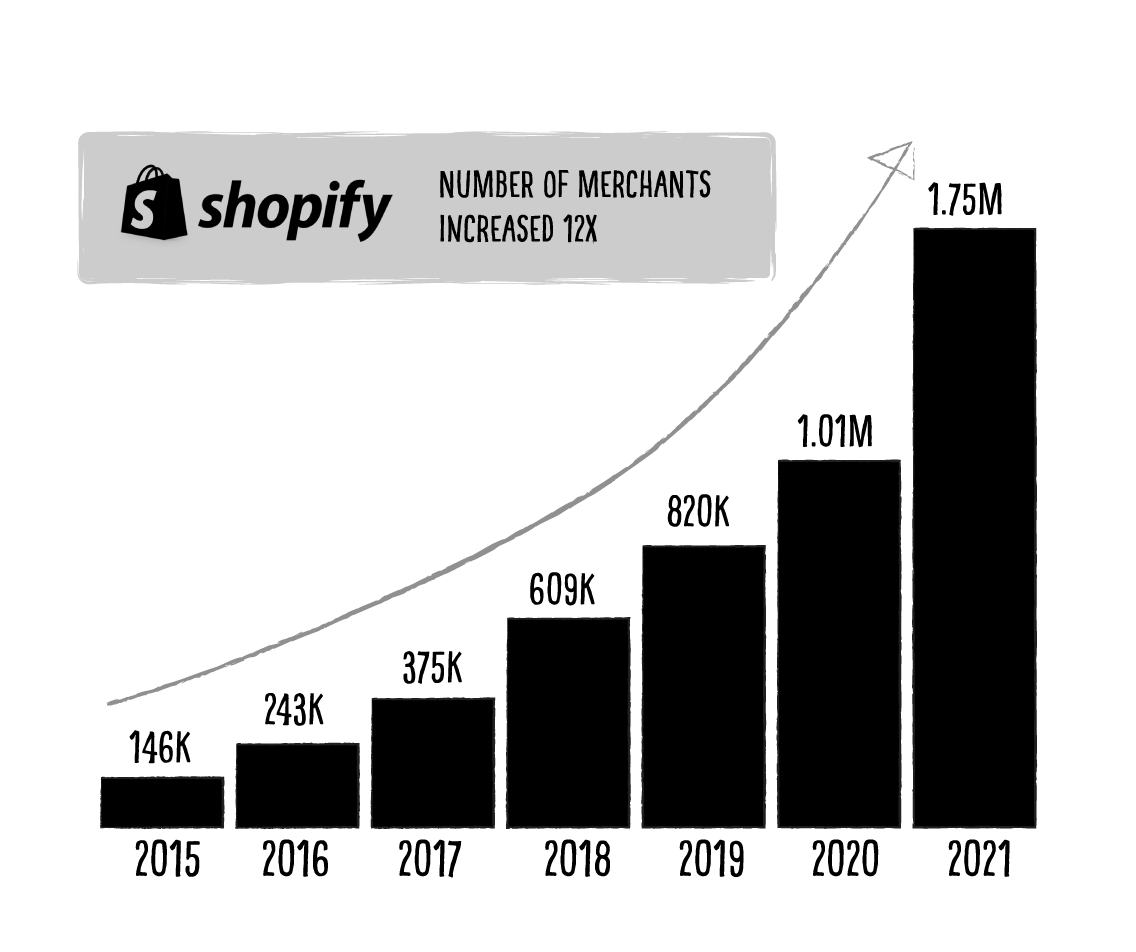 Source: Shopify Quarterly Results; represents stats at the beginning of each fiscal year

Early commerce brands like Ring reached hundreds of millions in revenue through creative social media campaigns and online customer acquisition strategies. But as more consumer electronics companies flooded the market, digital CAC rose to unsustainable levels. It was no longer a viable acquisition strategy for Ring to grow sales by relying primarily on Google and Facebook, which had once been the bread and butter for digitally native brands.

In response to the changing landscape, we began to explore investment opportunities deeper in the value chain—a shift from the brand/application layer toward the infrastructure layer of e-commerce. Rather than betting on which brands will capture consumers’ loyalty, we began to invest in the software and enabling technologies to help them get there. These e-commerce enabling investments include mission-critical infrastructure such as banking and financial services (Rho), shipping and logistics (Passport), marketing (PINATA), and cart conversion (Carrot).

This takes us to where we are today, making capital allocation decisions that will allow us to support the next wave of commerce enablement businesses supporting the rise of online purchasing. And we transition from looking back to once again making predictions on changing consumer behavior. Moving forward, we’ll focus on investing in the infrastructure helping to build the next phase of commerce.

Value creation is already beginning to validate this investing strategy. Today, there are 515 unicorns based in the U.S., representing $1.77 trillion in cumulative enterprise value. By our count, 20 DTC brands are on the list (we’re proud to have four of these as M13 portfolio companies: Rothy’s, Daily Harvest, Tonal, and Pax*), representing only 2% of the total enterprise value. In contrast, commerce enablement companies represent 11% of the total enterprise value, 5x the value creation of all DTC brands**. While select DTC brands will continue to reach unicorn status in the future, we believe the next wave of value creation in commerce investing will occur primarily at the infrastructure layer. As a result, we’re aligning our investment strategy to best capture this value. 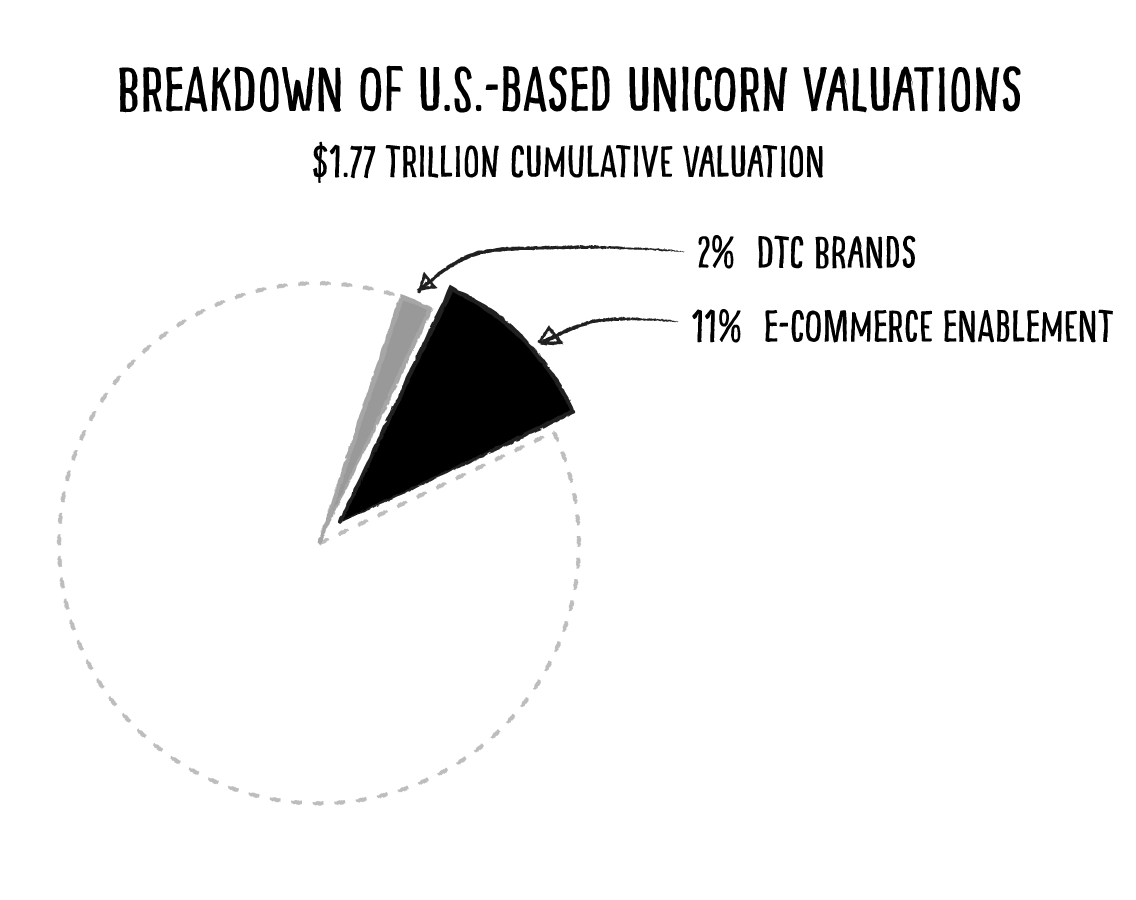 This isn’t to say we no longer support the DTC community. On the contrary, we love DTC brands and still count more than 30 such companies as active portfolio companies in Fund I. We believe that there are now more advantageous capital allocation options for DTC founders to consider, including new equity structures (for example, at M13 we’re incubating brands in partnership with founders—we’ll continue to build select companies at the brand/application layer) and non-dilutive forms of financing (which we’ll explore in a subsequent article on the future of e-commerce financing). With $850 billion of new TAM coming online in commerce, we see a golden age for emerging DTC brands and founders, and we’re investing in the tools and platforms needed to support them. 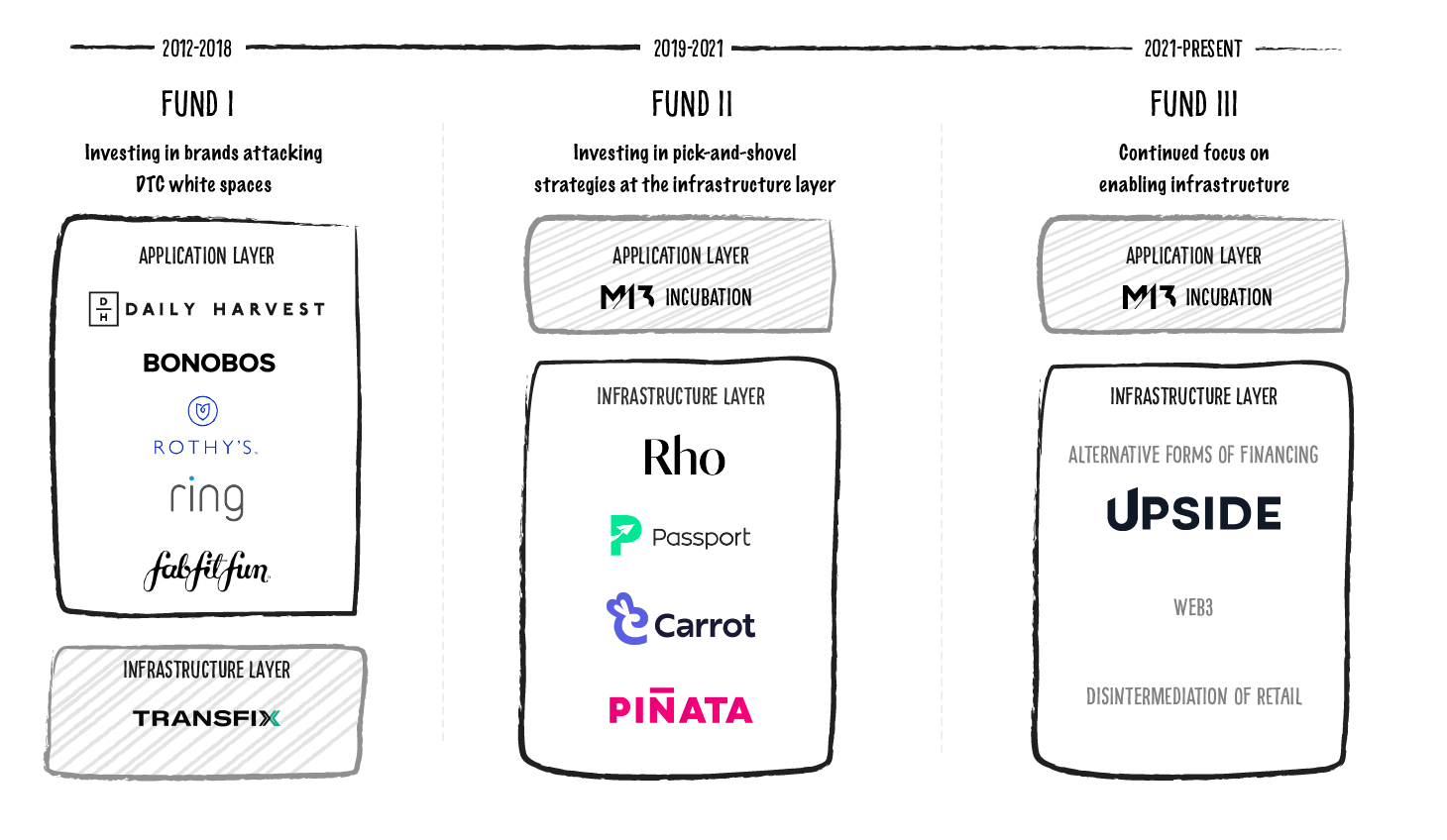 M13 Partner Anna Barber and Principal Brent Murri lead M13’s commerce enablement strategy and will share more insights over the next year, including these topics:

What alternative forms of financing are emerging to support DTC brands?

How can brands employ Web3 technologies to better serve customers?

How is the traditional retail model being disintermediated by the new wave of sellers?

If you’re a founder building in the commerce enablement space, we’d love to chat. Reach out to us at brent@m13.co and anna@m13.co.